The scientific name of the monk seal is Monachus monachus has been named after either the top of its head, which looks like it is wearing a Roman Catholic monk cap, or its tendency not to live in large groups preferring isolation from the human presence. The figure of the monk seal was represented on ancient Greek coins, and references to this species are also found in Homer’s epic poems. 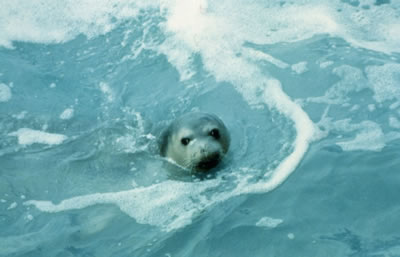 Today, however, the Mediterranean seal is considered to be the most endangered species in Europe. Monk seals used to live throughout the Mediterranean Sea, from the Black Sea to the Atlantic Ocean, Morocco and Mauritania. Under the influence of various factors, the population of monk seals has significantly decreased in numbers, and their natural habitats have been shrinking in size over the time. In the last 20 years, the monk seal has become extinct in more than 10 countries. 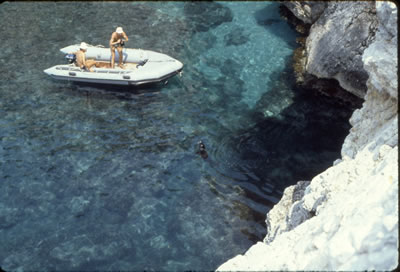 It is very difficult to calculate the exact number of individuals of the species because the populations are scattered. Generally, it is estimated that 400-500 remaining monk seals live today. Scientists confirm that 2/3 of the total population of the Mediterranean monk seal live in Greece. The population of northern Atlantic coasts of Mauritania is estimated to be 100-150 individuals, a population that is constantly decreasing in recent years due to an epidemic virus. Smaller populations are located on the coasts of Madeira, Morocco, Turkey and Cyprus.

The Mediterranean monk seal is one of the largest species of seals in the world; they grow up to 2-3 m and weight an average of 250 kg. It takes 3-4 years for females to reach reproductive maturity and a little longer for males. The life span of the monk seal has not been scientifically proven, but they are believed to live up to 35-40 years.

The skin is covered by a short, sleek dark (grey or brown) hair on the back and on their bellies there is a brightly coloured stripe. The monk seals’ pups are about 1m long and weigh around 15-20 kilograms. Their skin is covered by long black hair (1-1.5 cm) with a white stripe on their bellies, which differs in color and shape in every individual. There are no distinct differences between male and female monk seals. 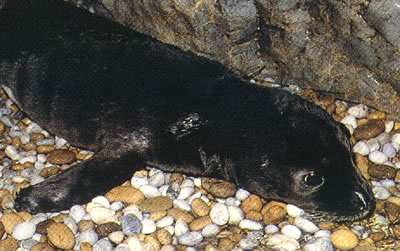 Pregnancy lasts about 10 to 11 months; births take place mostly during the months of May to November and peak between September and October. Lactation period lasts about 4-8 weeks. Given the length of the pregnancy and lactation period, monk seals usually give birth every two years and they only give birth to one pup at a time. Nowadays, due to human presence and intervention, Mediterranean monk seals use inaccessible caves to give birth, though historical descriptions indicate that they used to prefer open sandy beaches. Although newborns cannot swim well in their early days, they grow to be excellent swimmers within a few weeks’ time. 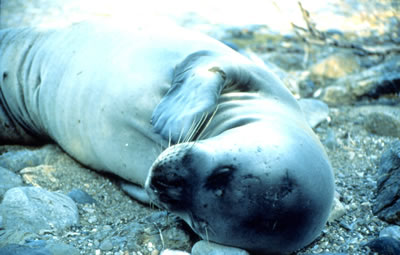 Mediterranean monk seals feed on all kind of fish and molluscs available in their natural habitat. It is estimated that an adult seals’ daily food consumption averages 5-10% of their body weight. In order to ensure their food monk seals prey on fish caught in fishing-nets and often follow fishing boats or migratory fish.

The Mediterranean monk seal is mostly threatened by:

Nowadays, fishermen occasionally consider it a pest due to the damage monk seals cause to the fishing nets when preying on fish caught in them. Such behaviour is due to limited fish resources that are constantly decreasing due to overfishing and illegal fishing, and the seals in search of their daily food are “forced” to seek food in fishing gear. This competition for food search is the main reason for their killing. In Greece and despite the barbarity of the act, it is a phenomenon that continues to appear, fortunately with ever-decreasing trends. It is remarkable that in the Marine Park area no such case has been reported in recent years.

According to historical descriptions, monk seals used to prefer sandy beaches or wide caves to give birth. In recent years, due to human intervention and the exploitation of natural resource (tourism, yachts, ports, roads, etc.), monk seals were forced to give birth in caves inappropriate for this purpose. Mortality rates among monk seal pups born in such conditions are quite high, because monk seal babies are weak swimmers during the first few weeks of their lives. As a result, they are prone to injuring or drowning by high waves during bad weather.

Entanglement in fishing nets is one of the greatest threats to seals and other marine species (e.g. Caretta caretta) throughout the Mediterranean Sea. Unfortunately, fixed and other types of nets lead to high mortality levels for monk seals. 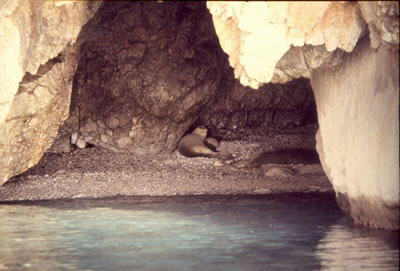